Bryan White is a CMA, ACM and Grammy award-winning country music singer and songwriter. Throughout his prolific recording career, he’s charted 19 singles, including six No. 1’s. His hits include “God Gave Me You,” “So Much for Pretending,” “Sittin’ on Go,” “I’m Not Supposed to Love You Anymore,” “Rebecca Lynn,” “Someone Else’s Star” and “From This Moment On,” which he recorded with Shania Twain. Bryan has sold more than 4.5 million albums. His list of honors include a Grammy, CMA 1996 Horizon Award from CMA, ACM 1996 New Male Vocalist, five CMT Awards, Canadian Country Music Awards. In 1998, White was voted one of People magazines “50 Most Beautiful People.” Currently, he hosts, “The Bryan White Podcast” and recently released a new single, “It Must Be Love.” Tune in to K103 this Thanksgiving Morning as Bryan co-hosts the Honky Tonk Time Machine with Glen for a 2nd time. The four hour show will start at 6 AM as Glen and Bryan talk about the hits and all things Thanksgiving. We will re-air the entire show Saturday Night at 6 PM in case you miss it! 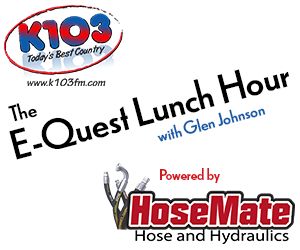