Heartland Idol Is Back!

Join K103 on the quest to be named this year’s Heartland Idol and win ONE THOUSAND DOLLARS!  Tryouts are coming up July 16th at the Osage Center in Cape and July 23rd at the River Radio Studios in the Sikeston Outlet Stores.  Tryout Times are 10 AM to 1PM each day and you only have to try out once.  You’ll sing 60 seconds of acapella for the judges, so know what you plan to sing ahead of time. From there, the quest will be on to sing on the main stage at the SEMO District Fair for $1000!  Check out the complete contest details and rules below!

The 2022 Heartland Idol contest (henceforth referred to as “the contest”) is a Mississippi River Radio production (KEZS, KCGQ, KGKS, KGIR, KZIM/KSIM) in conjunction with our sponsors,
including but not limited to: the Pulaski County Fair, Benton Neighbor Days and the SEMO District Fair. No purchase is necessary to enter the contest. Contestants must be present at the
event to qualify and/or win.
QUALIFICATIONS:
Contestants must be 14 years of age or older as of 7/31/2022 and must prove their age prior to auditions with appropriate and valid documentation, including but not limited to a state-issued
photo I.D. or a copy of their birth certificate. Contestants under the age of 18 must have a parent or legal guardian sign their consent form prior to any subsequent appearances that may
occur, including preliminary rounds and the grand finale at the SEMO District Fair. Sponsors, employees of sponsors, employees of area radio stations and their families (including those
owned by Mississippi River Radio), and previous Heartland Idol grand prize winners of the “Adult division” of years past are not eligible to compete.

RULES AND REGULATIONS:
Auditions: Contestants must sing seconds ACAPPELA for the judges at tryouts on either 7/16/22 or 7/23/22
Contestants must be available for ALL preliminary dates to remain eligible for the finals. Any contestant unable to attend their assigned preliminary will be disqualified. Failure to follow
these rules will result in immediate disqualification from the contest’s auditions. Dates are as follows:

SONG SELECTION:
Song selections are governed on a first-come, first-serve basis. Contestants may be asked to reselect a song in the matter that the particular song has already been chosen by another
contestant. Music will be provided for contestants by the sound engineer unless requested otherwise Contestants will provide their song selection(s) for performance no later than one (1)
calendar week prior to the day of the event. If a contestant chooses to perform with their own karaoke track, it must be devoid of lyrical content. The track(s) must be delivered no later than one (1) calendar week prior to the day of the event. This can be done via CD/MP3/Jump Drive, using email or by mailing or delivering to our address. Contestants are expected to arrive in a
timely manner for registration (by the time given from Mississippi River Radio); any contestant who arrives after the contest has begun will be considered disqualified and will not be allowed
to perform.
CONTESTANT SELECTION: Contestants will be notified via email and/or phone after July 31, 2022 if they will continue as a semifinalist. Semifinalists will be announced on air in August on
all stations and posted on all station websites:
k103fm.com 939MIKEFM.com realrock993.com kzimksim.com
Contestants selected by the judges at the preliminaries will be notified before the end of the event to move on to the finals. Contestants selected at the preliminaries by audience vote will
have their names announced on-air on Mississippi River Radio stations, websites and Facebook pages within 72 hours; they will also be notified via phone call and/or e-mail. All contestants
will be contacted via phone call and/or e-mail after selection in each round with vital information concerning the next event (placement, location, instructions, etc.)

NUMBER OF PERFORMERS: An act in the contest may consist of up to two (2) performers maximum, both of whom must meet all of the eligibility requirements to enter the contest.
Note that only one (1) grand prize will be awarded, despite the number of performers in the winning act. If performing as a duet, both members of the duet must be present and perform
together at all scheduled appearances and performances; failure to produce both members of a registered duet will result in disqualification for both.

JUDGING: A panel of no less than two (2) and no more than four (4) judges will judge each event in the contest, basing their decisions on a set of criteria including, but not limited to:
vocal ability, stage presence, and showmanship. The decisions of the judges are final with no exceptions. Judges may vary at each event. Aside from the contestants chosen by the judges to
move on to the final event at the preliminary events, audience voting will determine one (1) additional finalist at each preliminary event. Audience voting ballots will be counted by
Mississippi River Radio at the conclusion of the event, and the results will be announced on Mississippi River Radio stations and online within 72 hours maximum. If it is found that
contestants or attendants of the preliminary event have attempted to alter the outcome of the event, the corresponding contestant will be disqualified.

PRIZES: One contestant will be chosen as the “2022 Heartland Idol” at the grand finale event and will receive $1,000. Note that there is only one (1) grand prize to be awarded, no matter
the number of performers in the act selected as the winner(s) of the grand prize. Winner(s) must claim their prize at Mississippi River Radio, 324 Broadway, Cape Girardeau, Missouri, 63701 during regular business hours: Monday through Friday, 8:00 AM to 5:00 PM. Prizes will not be mailed. Winners must provide a photo I.D. at the time the prize is claimed. If the winner
is under the age of 18, a parent or legal guardian must be present to sign for them. Any prize not claimed within 30 days of notification is considered forfeit, and the winner(s) waive all
rights to that prize. Any taxes, fees, gratuities, or otherwise that result from the prize are the sole responsibility of the winner and not of Mississippi River Radio or the contest’s sponsors.

ALL EVENTS: Contestants will not be allowed to utilize personal recording or sound equipment on stage during their performance, including but not limited to: personal microphones, musical
instruments, etc. Props will only be allowed on-stage with a performer with prior approval from Mississippi River Radio. Contestants are prohibited from consuming alcohol immediately
prior to or during any of the contest’s events in which they appear. If a contestant appears intoxicated before their turn to appear on-stage, they may be disqualified at Mississippi River
Radio’s discretion. A contestant’s performance cannot include vulgarity or profanity of any type—visual, verbal, or otherwise, at the risk of disqualification. For safety purposes, all
contestants must remain on the stage at all times during their performance at any event.

LIKENESS RIGHTS: All participants in the contest understand that by participating, they give implicit permission to Mississippi River Radio to utilize their name, voice, and/or likeness for
promotional purposes without compensation, as well as recording phone calls or performances, etc.

RESPONSIBILITY: Contestants understand that Mississippi River Radio, its stations, and all sponsors of the contest are in no way responsible for any injures that may result, in whole or in
part, from the contest or prizes awarded. The aforementioned entities (River Radio, etc.) are not responsible for equipment malfunction, failure, or sound difficulties that may occur during
the contest. All rules are subject to change by Mississippi River Radio at any time during the contest. Any contact information provided by a contestant will remain with Mississippi River
Radio and will not be given to any other entity with the exception of the winner’s contact information provided to The Brothers Walker for recording session scheduling purposes. 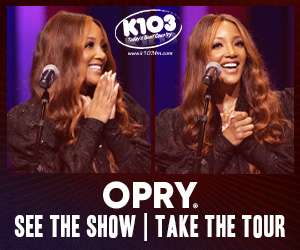 Win Car Payments for a Year!